The science fair is an excellent time for students to collaborate across international borders. It’s also great for them to make connections between what they learn in class and the world around them. For this session, I wanted to show how mathematics can be used in real life applications, give the students some programming experience, and introduce video games as a medium for learning and study.
Mathematics are important tools we can use to describe and manipulate our world, but much of that wonder can be lost in day to day classes. For this class, students had the opportunity to link the math they had learned in class with game development and the wider area of video games. The students could use basic equations and inequalities to describe a game character’s movement and speed. They could also use vectors to define a character’s position and create a path for the character to follow. With a little mathematics, the students could begin to learn some basic programming.
Programming has become a valuable skill and useful in many industries and occupations in the modern world. The students were able to see programming in action by using the Godot Game Engine and the GDScript programming language. They learned the basic programming principles of variables and functions. They also learned basic ‘if’ statements in functions to manipulate variables. With these basic programming tools, they could program the movement of a game character to reach a goal.
Video games have grown into a massive industry around the world and many students have experience playing them. It is a young artform that is just beginning to be studied and built upon. By using video games as a bridge to science and math, we can motivate students to explore more in these areas. For this class, we wanted to show how students can use math and programming to create something fun for people to enjoy. We also wanted to motivate them to relate and integrate their math skills with their other interests.
In this class, we showed how math can be used in real world applications and gave the students some programming experience. We also introduced video games as a medium for learning and study. The science fair was an excellent opportunity for international relations and joint study. I hope the students will have more chances like this in the future. 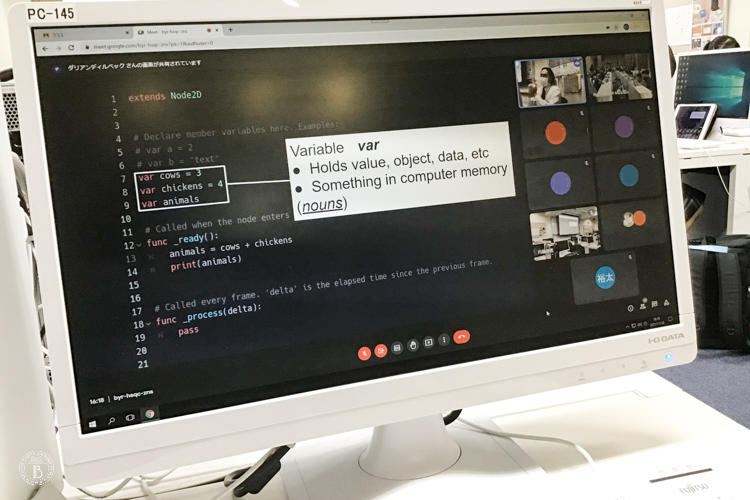